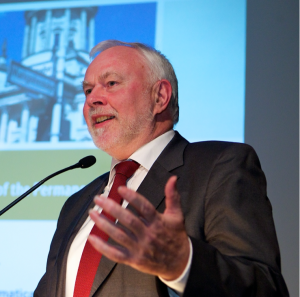 Honorary award for the former president of ZIB

Martin Grötschel receives the Cantor Medal of the German Mathematicians’ Association (DMV) for 2021, as decided recently by the DMV’s executive committee in Berlin. The Cantor Medal is the most important scientific award of the DMV. It is usually awarded every two years.

Martin Grötschel steered the development of ZIB for decades, since 1992 as Vice President and from 2012 to 2015 as President. His main research areas include Mathematical Optimization, Discrete Mathematics and Operations Research, each with close ties to computer science. Grötschel has worked in a variety of application areas, including transport and logistics, telecommunications, chip design, energy and flexible manufacturing. Since 1992 he has been involved in electronic information processing and communication, open access, open science and related topics. With astonishing energy, he promoted the national and international development of mathematics as a whole and, first at ZIB and then as spokesperson of the DFG Research Center “Matheon – Mathematics for Key Technologies” (2002 to 2008), created an internationally outstanding collaboration between basic mathematical research and a strong application orientation in cooperation with partners from business and industry.

His scientific awards include the Leibniz Prize of the DFG, the Karl Heinz Beckurts Prize, the Dantzig, Fulkerson and John von Neumann Theory Prize and the EURO Gold Medal. Grötschel received honorary doctorates from the Universities of Karlsruhe, Magdeburg and Augsburg as well as from the Vietnamese Academy of Science and Technology. Grötschel is a member of the Leopoldina, acatech, the Chinese Academy of Sciences, TWAS, Academia Europea and the US National Academy of Engineering.